Try for free
Back To Accomplished Peeps 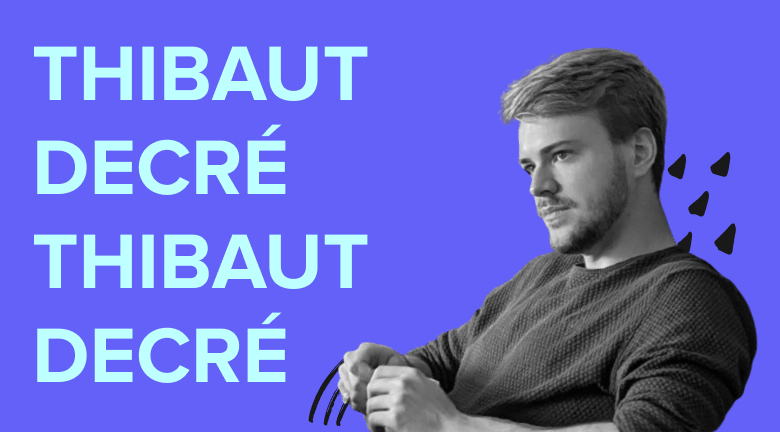 In this Accomplished Peeps interview, we spoke with Thibaut Decré, Head of Strategy at IQM Software. We've been in contact with quite a few remote leaders over the past few weeks that we've been running our Accomplished Peeps series, but when we connected with Thibaut, we were particularly intrigued to speak with him and learn more about his role as Head of Strategy at IQM Software and dive into some of the ways he's led his remote team to success.

Within Thibaut's role, he is responsible for making sure his team has a clear direction with where the business is going and ensures they keep on top of pursuing their priorities. Thibaut is also in charge of the commercial side of the business, bearing parts of the responsibility of making sure that enough money comes in and positive customer interactions are taking place. Apart from this, he's got plenty more on the go and manages a plethora of tasks within his role, all while maintaining a high level of leadership and support to his team.

When asked whether he was willing to share his day-to-day with us and take us through a few of his daily habits along with how he manages remotely, Thibaut and his colleague, Mark jumped on a call and started firing away with questions. They even went 'off script' let's say and asked one final question that we all should consider reflecting on. Check out which one it was in the full video interview.

Describe the layout and the feel of your personal workspace?

I've got a bookshelf behind me with some of the more relevant books that I've decided to keep -  the ones that I'm actually going to refer to.

I've also got this background, which sort of separates my personal space from my workspace because obviously like everyone else, I'm working from home. When I'm talking to my customers or the team, I like to see the plants behind me, because I spent so much time with my webcam on, I actually see the plants in the webcam which is quite nice.

As for tech, I've got a desktop, a PC with two screens in front of me - one portrait and one landscape mode. I did a few improvements also, thanks to Mark, on the lighting and the setup to make sure that my eyes don't get that tired.

And I'm currently on my Surface, which is the non-Apple equivalent of an iPad, I would say. I've got two or three devices around me, and normally I like to take notes on this one, cause I like to take notes by hand sometimes, but most of the work I do on the desktop; it is reasonably organized.

I mean it's a little bit chaotic, but it's more organized than I'm used to. And then one really important feature for me is to have a whiteboard close at hand, even though we work remotely and have all kinds of online collaboration tools, for me, nothing beats actually drawing stuff by hand, sometimes it's just easier.

Which one book on your shelf would you recommend the most?

The Prosperity Paradox - It speaks about development aids in the traditional sense and how shoving money down people's throats isn't the most sustainable way of doing things. It also talks about how we can help people by helping them innovate and build businesses of their own and get pull funding rather than push funding. Overall, it's a parable about IT project management in a big corporate and how to implement agile processes and scrum and DevOps in an organization like that, where the hero is a project manager, which I think is really funny and it's written as a novel.

What's one habit or ritual you need to start and finish your day?

I've made a conscious decision a few years ago to stop drinking caffeinated coffee, which means that now I'm no longer dependent on taking a coffee in the morning. I've tried to get a bit more of a morning routine in, but I'm really not a morning person. So, it never works to do that consistently.

I often go for a run at the end of the day to balance out the mental fatigue with the physical fatigue. And actually, when I come back from a run, I then feel mentally a bit more restored.

How does your team use asynchronous communication to stay in the loop while working remotely?

I would say we've now got a set of quite sophisticated practices within our project management tool, which is called Click Up, in which we store basically all of the information that's related to tasks, projects, and work.

So if a new piece of information comes in with regards to a certain project, or even a certain specific piece of work, we would comment on that task, tag a person on that task, and then when they get around to it, or if they've got the notifications on that on Click up, then they would get that notification, and that's how the asynchronous bit works.

We do have Slack as well, however, Slack tends to be a bit more simultaneous or synchronous rather than asynchronous; people tend to respond really quickly. So I think from the asynchronous bit, we're storing a lot of information in Click up with regards to what work needs to be done and when. We also have a tension system, which is based on Holacracy, where if I observe a difference with what I would like something to be and what it currently is - that's a tension or difference between a current state and the desired state, then I will record that.

We've got a number of lists depending on whether it's a tactical tension, a governance tension, or another type of tension, then the next time we have a meeting to resolve those tensions.

For more on the Tension system Thibaut and his team uses, check out the full interview (10:36).

Which habits, tools, beliefs do you live and work with that allow you to overcome the struggles of working remotely?

So, every sprint we do a check-in, how was that sprint for you? Are you still enjoying what you're doing? And then also at the beginning of important meetings, we have a check-in round to check what people's emotional state is, and whether they're distracted, are they a hundred percent in the meeting or not? Not to force people to be in the meeting, but to be aware of how people are feeling.

Another thing we do is at the end of a sprint - we take a moment to celebrate, and to look at stuff that went well. We've been more actively thinking about and trying to reinforce it, also putting in place celebrations. We've now planned with the team because we've hit a revenue target, we're planning to go out for a day into the woods and do some bushcraft camping activities together. I think, in short, there is still some physical stuff that's important in that.

We're putting a number of processes in place that make it more explicit to involve the emotional side that would be a lot easier to pick up on passively if you were in the same office. And I think something that we've incorporated quite well and quite consciously is a number of team-building rituals let's call them that we've put in place, both digitally and physically. I think we are a bit more deliberate about our team-building activities than we would be if we just had all of that in-person ad hoc banter and kind of stuff.

How do you limit your distractions while working from home and which personal productivity hacks do you follow?

I don't like productivity hacks as a concept, I think it's practices that you need to train yourself to do. There's no such thing as a hack. It's all hard.

Limiting distractions - well actually, as a matter of fact, I think that one of the benefits of working from home is that you can get distracted and that you can go and do some shopping during the day, if you want to, go to the dentist, etc. I live very close to the beach, so when I need a breath of fresh air, I like to actually go out, take half an hour or so to walk to the beach for five minutes, sit there, gather my thoughts for 15 minutes, then come back.

I don't try to avoid getting distracted, but then also my perspective on that is a bit skewed because I live on my own. I don't have any kids or a partner running around asking stuff of me. So it is quite easy for me to keep focused even though I would say the amount of online communication that comes in is obviously a bit more than what we would be used to in a physical environment. So I'd say that the professional distraction is sort of on a similar level.

To avoid distractions, one thing that I do is when I am in a meeting, I turn off all the notifications. Also, one of the things that I've done for a number of years now is always have my phone on silent. I'll miss a phone call every now and then, but honestly, it's not the end of the world. I don't have the constant push notifications that are distracting me if somebody sends a message on WhatsApp, and it works really well for me, simply not getting the buzz or the ping.

PewDiePie, unrelated to my job completely, but I've been watching PewDiePie for five or six years now. I really enjoy his content and he's gone from just purely gaming stuff to actually having some more interesting thoughts about life and philosophy.

From a professional perspective, I don't have many. I've been starting to listen to podcasts now, which I didn't do before. I do quite enjoy Brene Brown's podcasts. She has two, I like the Radical Candor podcast and I'm listening, since lockdown now to Simon Sinek's, A Bit of Optimism, which is quite good.

If you could do anything else than what you're doing now, what would it be?

Nothing, I'd be doing what I'm doing now. I've consciously chosen to give up a whole range of stuff to do what I'm doing now. Still very happy with that choice. I'm exactly where I want to be. I have been given the opportunity to create this space around me, to work with the people I enjoy working with, working on stuff that I want to be working on, and working towards a goal of making a positive difference in the world, in the way that we think there should be a positive difference that has made.

We'd like to thank Thibaut Decré and Mark Gilbert of IQM Software for letting us share some time with them to get to know a bit more about the inner workings of a remote team at IQM.