Try for free
Back To Accomplished Peeps

Thriving in the Face of Disruption with Shopify's Head of Revenue 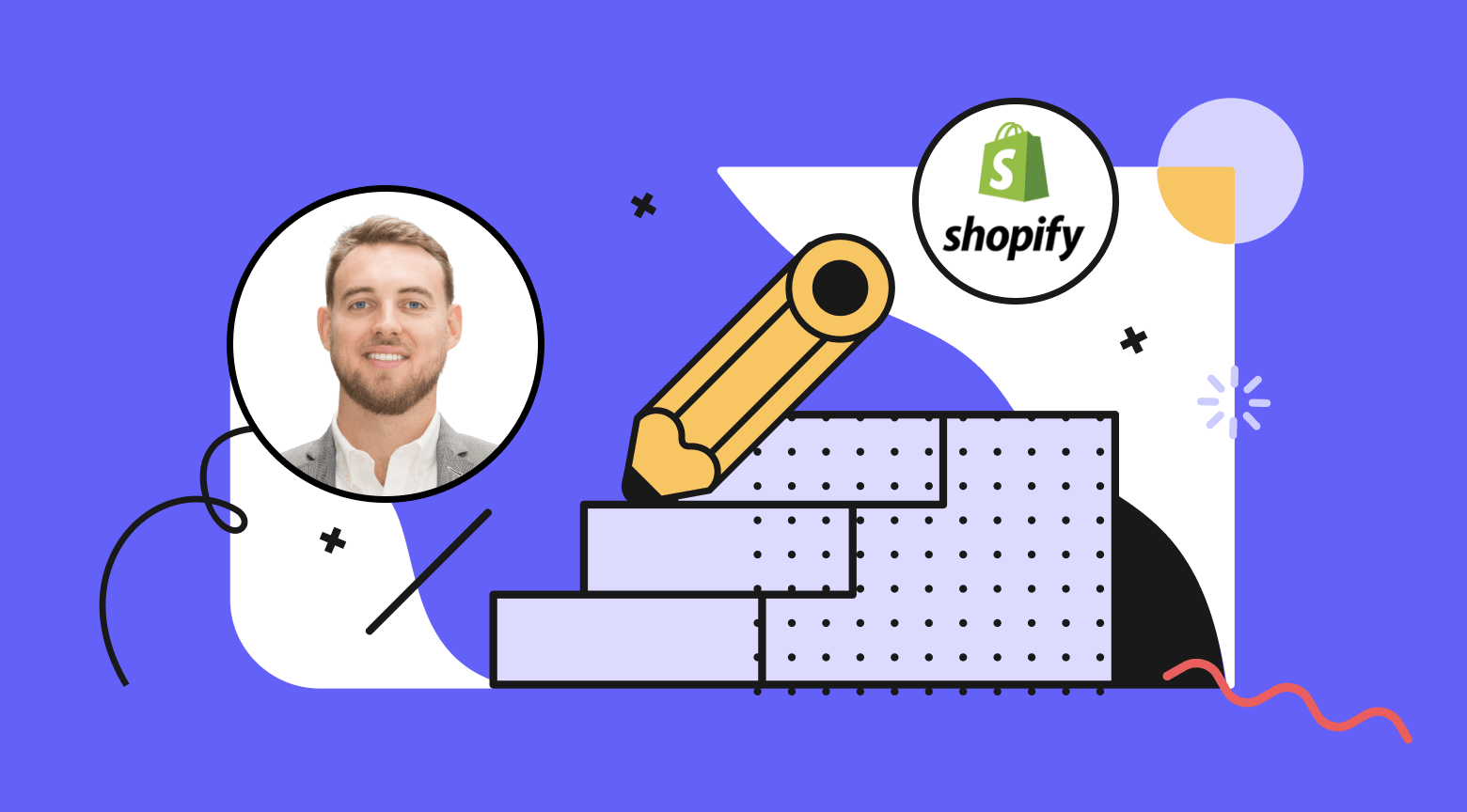 We recently sat down with Kyle Norton, Shopify's Head of Revenue for Canada's largest e-commerce site. Kyle has spent the last year and a half building Shopify's retail revenue organization, on their point of sale product.

It's been a wild ride for businesses over the past year, and while many have sunk, Shopify has continued to ride a wave of success. How have they managed to navigate amidst disruption? Here's your insider's look into how remote teams at Shopify prepared for success during the pandemic, which changes they made to their objectives to keep their employee centric focus, and how they've been growing their revenue throughout it all.

Although Shopify wasn't left completely unscathed, they are considered as one of the businesses that thrived during 2020. In the first few months of the global pandemic, online sales shot up by >30%, and shortly after, many brick and mortar shops started making the move online. When considering the best way to transition to selling online, Shopify is a clear pick for retailers, so it's no wonder why interest for their service grew over this time.

Shopify, the 2nd largest eCommerce platform in the world (behind Amazon), supported new merchants by helping them adapt to the online environment, while at the same time providing their own employees with the tools to thrive, so they could lean into the upsides presented by the pandemic. All of the above helped to propel Shopify forward in the face of disruption.

Here's how Shopify maximized their impact and reach during the pandemic.👇

It was the brick and mortar stores, many of whom had almost no online presence prior to the pandemic, that became Shopify's new users. Needless to say, they were looking for a simple and supportive solution to set up online, and Shopify was a clear choice. Although many merchants were eager to hop online, others experienced resistance and as Kyle shared, were under a lot of stress while making the move.

Shopify's implementation team prioritized mentoring merchants by helping them to move up the 'time to first value', allowing them to start transacting and transitioning parts of their business online as quickly as possible.

"If you're dealing with mom-and-pop retailers that have been operating by brick and mortar for twenty-five years and now in order to survive, they have to get online. That's a huge ask. That's by no means a small feat. So we really leaned into our teams taking a proactive approach to do some baseline teaching and try to make the pain of change as minimal as possible."

Kyle mentioned that a major shift during this time was in the training they gave their reps. They were instructed to not push as much, and instead, lead with more empathy (more on this later), something which at times, went against their sales objectives.

"Empathy is always a big part of our sales style, you needed to really lean into that and find ways to still try to get business done, but do it in a slightly different way."

Kyle shared with us that they needed to recreate the entire back half of their year plan twice and as a result, pivot their messaging to reflect their new plans.

"We made a significant pivoting to our messaging, how we were going to market, obviously, training people to sell very differently, because now you're selling to people that are worried about the businesses going away."

By pivoting their messaging while continuing to place their focus and attention on the merchant's needs throughout their transition online, Shopify was able to build greater trust with their users. Moreover, Shopify showed up with the intention to be of service, something that is key to a soulful sales pitch.

"It's hard to tell what of this was changing messaging versus just market dynamics. But conversion rates went up, rates went through the roof, and we had a bunch of very productive months after that initial crash because Shopify's world view was, you need to be omnichannel in the future and you need a unified point of sale and e-commerce business. So we were positioned really well for this new world, luckily, we just continued to lean into it."

Leaning into the cards they were dealt is what helped Shopify continue growing at an accelerated rate. By helping customers wade through the uncertainty and the angst and talking them through how other customers had made the transition, they were able to acquire new users easily.

Apart from Shopify's focus on supporting their merchants, the company puts a lot of attention on their staff, working towards strengthening the employee centric workplace they've built. Maintaining a strong employee centric focus isn't always easy in times of turbulence, but Shopify has managed to do it well.

"We were one of the first really big companies to ask people to work from home and then pretty shortly after that, short of actually announcing that we weren't going to return to the offices, we decided we'd be moving to a fully distributed model moving forward."

Shifting to a remote work model was a bit pivot for Kyle, especially since he was traditionally used to boiler room esque environments.

"I typically didn't like working from home. I always was sort of frustrated when people worked from home...And so when we announced we were going remote, I just did a crash course on how to manage remote teams because I didn't feel like I was very good at it".

Kyle shared with us that in order to master remote, he took as much as he could from companies that had been doing it really well; like the Automatic and Base Camp of the world.

Knowing how to handle the logistics of individual employee challenges was a focus for Kyle and his team, and something they knew they needed to get good at if they were to master remote.

"The very individual challenges of a new working style, a ton of stress and anxiety outside of the office, and just acclimating to the unknown and that lack of control."

Showing up with compassion and empathy for what their employees were experiencing was key to supporting them through the personal struggles just as much as professional ones.

Shopify, like many e-commerce companies, faced operational challenges, including needing to adapt its tool stack to meet new demands, change its processes, and learn how to form and develop connections in a new way, among others.

"It was a really big pivot. The nice thing is, given the industry we're in, we were really well set up to manage all the changes."

Although Shopify couldn't have prepared for the pandemic, Kyle shared that they did have some existing processes in place that really helped them through the uncertainties. On top of that, being a company like Shopify, which has a substantial rainy day fund set aside, they were able to focus on taking care of their staff, even if it meant needing to adjust quotas and objectives.

"You know, we tweaked our quotas, we actually moved people off of [when we thought it was going to be really bad, like right at the beginning] and we actually pulled our team off of variable compensation. So we guaranteed their commissions because we just you know, there was a chance that our business was going to tank and we wanted to take care of our folks."

Kyle mentioned that the beauty of being in a company like Shopify is that you can make really employee-centric decisions. And, even while navigating a major disruption, they've been able to keep their focus in this direction.

"We didn't change our goal, we kept focusing on the same things. But, we changed how we did a lot, especially after we announced we weren't going back to offices. You do have to make a holistic change to how you manage a team as a result [of moving to distributed]."

Will Shopify be heading back to the office?

This is the million-dollar question that many companies can finally start to answer, now that the world is slowly returning back to some form of 'normal'. As the option to work from the office has been available to many organizations for some months already, the trend moving forward appears to be positive. Kyle shared with us that pre-pandemic he always preferred his Sales teams to work in-office. Although, he now tends to lean on a work from home model/hybrid workplace model, he does still emphasize that as much as working remotely provides the ideal work-life balance, there are tradeoffs.

"The more you try to replicate that [in-person connection], it's diminishing returns, versus saying, where are the strengths of distributed work? Well, it's a broader, more diverse hiring pipeline; it's being able to get the top global talent; it's moving to a more asynchronous work style; It's personal flexibility."

Kyle made it clear, for him personally, he doesn't want to go back to an office, and feels that a fully remote team offers a lot of really interesting advantages.

"I can hire the best of the best talent from all over and get a much more diverse team in terms of demographics, but also in terms of opinion and thought, and background. I'm now fully all-in on remote. I've done a complete 180 for me personally and how I think teams can be run. And I think in the way of the future, to be honest, It feels barbaric to say to somebody like, hey, I need you in this physical location for 80 percent of your year, like five days, five out of seven days a week. I need you in this desk, like right here."

As Kyle commented, now that most people are accustomed to working from home, if their companies were to start restricting their freedom, this lack of flexibility would catch people by surprise.

"We will continue to select an attractive group of people that value flexibility to be able to either travel or spend time with their family and there will be other places that will select people that really thrive off of that office environment and really want that camaraderie and social element. Both will be great and neither will be the right or wrong thing. I think generally remote is more of a path that people want to choose, but still, there'll be room for both."

‍This post was extracted from a conversation we had with Kyle and is not endorsed nor does it represent the views or opinions of Shopify as a company.