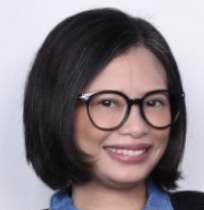 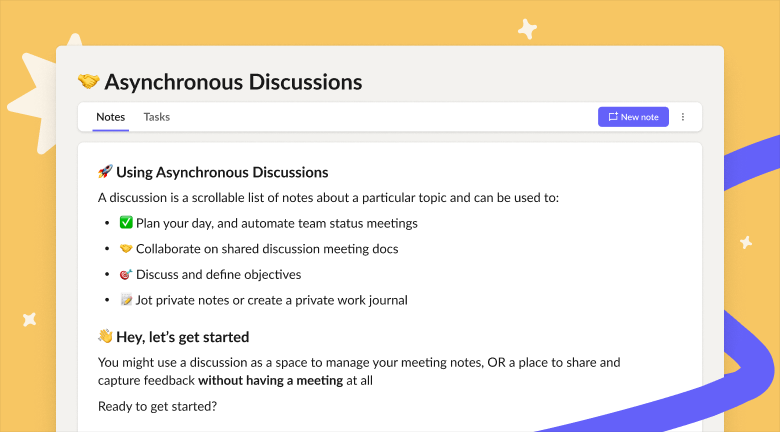 “Some people have as many as nine or ten video meetings in a day,” according to a Finance's Online article on Zoom statistics. If each meeting is 30 minutes long, that’s a solid four hours of being in Zoom calls. Certain situations do require distributed teams to connect via video, but this form of collaboration shouldn't be the default. Instead, there is a much better alternative, which allows teams to reduce the number of video calls they have, so they can spend more time on focused deep work. That alternative is called an Asynchronous Discussion, and, if you haven't had one yet, it's about time to test one out.

What is An Asynchronous Discussion?

How Do You Have Asynchronous Discussions?

The simplest way to hold an effective and structured asynchronous discussion is by using an asynchronous collaboration tool. The best one will allow you to start private and public discussions, add collaborators, document meetings, link in with your calendar, record action items and more.

Here's a quick 3 step process to starting an asynchronous discussion:

1. Determine the type of asynchronous meeting you are holding.

Are you having a brainstorming session or a status update meeting? If you're holding a brainstorming session, what is the main outcome or objective? For example, the session’s goal might be to think of the next video topic the marketing team needs to produce for the next four weeks. Once you've chosen the type of meeting, save yourself some time by planning the agenda based off of a meeting template.

Regardless of if you're holding a synchronous meeting or asynchronous discussion, you need to write a clear and specific meeting agenda to give structure to the meeting. Ideally, you shouldn't exceed more than three. According to several studies done about memory, on average, our brains can only process 3-4 pieces of information at once. If you have more than five topics to go through, break them up into two asynchronous discussions.

An asynchronous discussion is a godsend for distributed teams for many reasons. One being that it saves everyone the hassle of figuring out the best time to schedule a video call. Even though an async discussion is contributed to in the participants own time, there should still be a deadline. Having a deadline is crucial to avoid too many open discussions with no clear end or action items.

If you need a more in-depth explanation, of what is an example of asynchronous communication, continue reading.

Because asynchronous work doesn't have to happen in real-time, people tend to overcommunicate. In Slack alone, there are 1.5 billion messages sent per month. And according to Sanebox, an email management software, "62% of the emails in the average inbox are not important and can be processed in bulk."

That's why tools to help facilitate asynchronous discussions and, ideally, replace some synchronous meetings, are a crucial key to staying productive—and let's be honest—sane.

Async discussions features allows you to:

✅ Plan your day, and automate your team status meetings with Check-ins

🤝 Collaborate on meetings with your team in discussions

🎯 Discuss and define objectives, then create and assign Goals

📝 Jot private notes or create a work journal for yourself

As a video producer working at Where I’m always brainstorming new ideas with our Head of Content Marketing. Instead of jumping on a Zoom call, I just start an asynchronous discussion that lists all the initial video ideas. I can tag our team, so they can share their opinion and prioritize our next steps. Since joining the Where team, I went from 2-3 Zoom calls per day to 1-2 per week. For someone who has been working remotely for 11 years, that is a remarkable feat! Thanks to an async-first culture that the Where team has created!

So, now the big question...

Why Do Asynchronous Teams Perform Better?

According to HBR.org, "the time spent by managers and employees in collaborative activities has ballooned by 50% or more." Collaboration exhaustion had increased exponentially during the pandemic when many companies had to operate remotely, which has left many employees unhappy and less productive. That's why distributed teams who have mastered or are starting to master asynchronous communication are happier and perform better.

FutureForum, a leading organization that helps redesign and reimagine work, found in their research that teams who use asynchronous status updates have scored higher on sense of belonging compared to teams who hold regular Zoom status meetings.

Asynchronous work from home is a double-edged sword though. On the one hand, you get the luxury of working in your place on your own time. On the other hand, over-communication can take over your life and create more anxiety and stress. But at the end of the day, you and your team have the option to focus more on deep work and learn how to leverage asynchronous discussions.